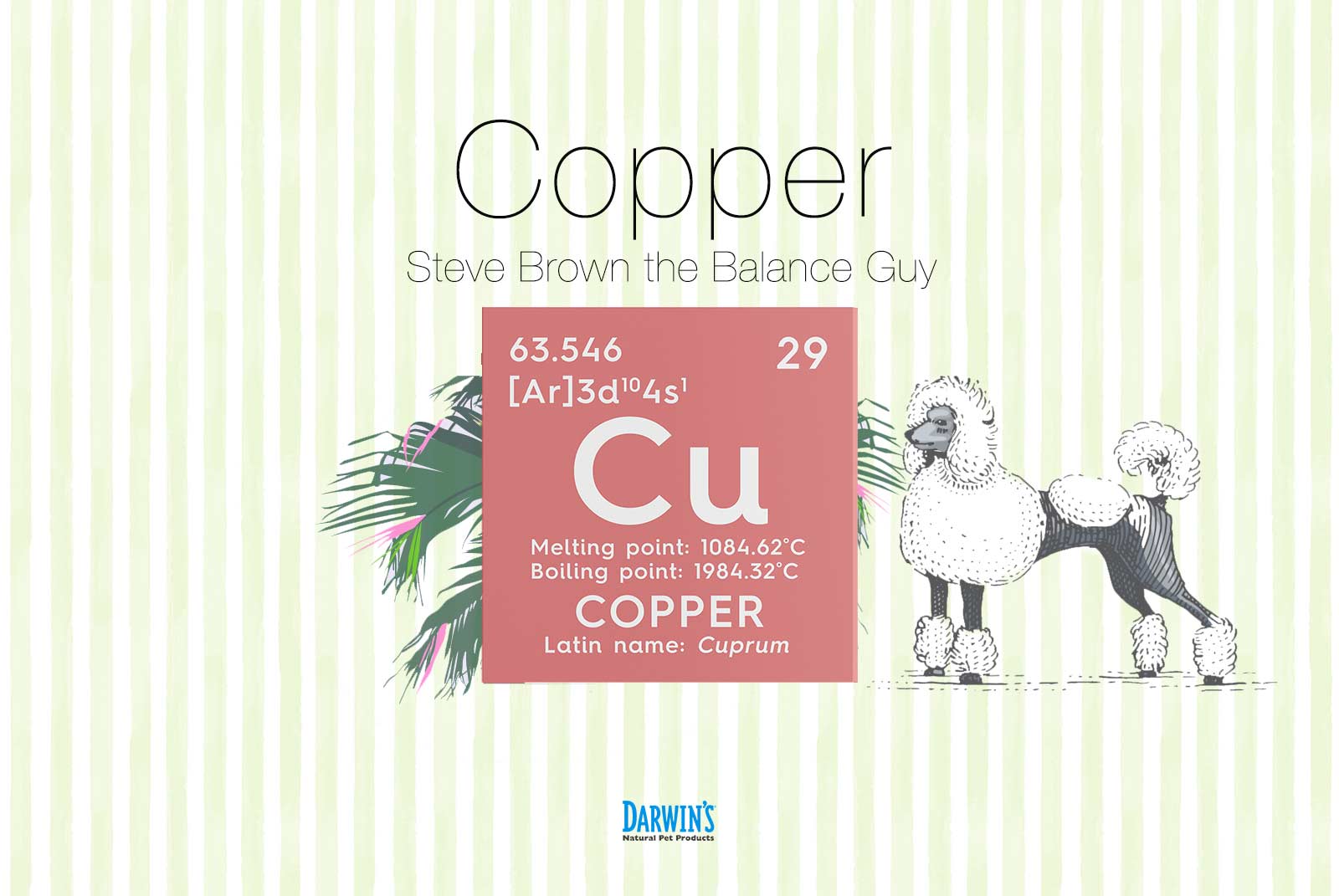 I worry about too much copper more than I worry about not enough copper. Especially in the “feed-a meal-of-liver” advice from a popular author and in some commercial raw foods.

Copper is an essential trace mineral. It is necessary for life, however in small amounts only (reported in parts per million) . Excess copper can cause liver damage, nervous system disorders, anemia, and other health problems, especially for copper-sensitive breeds such as the Bedlington Terriers. Other copper related issues have also been found in Dalmatians, West Highland White terriers, Skye terriers, and Labrador retrievers.

In wild prey, almost 75% of the copper in ruminants (beef, bison, lamb) is in the livers; while with small prey, including poultry, the copper is more dispersed, with high concentrations in parts such as the hair and brain that are often hard to find and feed.

Poultry-based recipes, homemade and commercial, often do not meet AAFCO, FEDIAF, or ancestral standards for copper. Ruminant recipes that contain liver almost always meet the standards, and can

have excess amounts of copper. However, if one rotates poultry and ruminant foods, in most cases, the overall amount of copper will be within standards, as long as some ruminant liver is used.

Some commercial manufacturers who make, “complete and balanced foods” add copper to their beef, bison and lamb foods even though they contain liver. In many cases, and I’ve written about these in the Whole Dog Journal, adding a copper supplement to a recipe that includes beef liver causes the diet to exceed the European legal limit for copper in dog food. I suggest avoiding these recipes, especially for those with copper-sensitive breeds.

Why do some companies add copper to diets containing beef liver? Because it’s easier and less expensive for a manufacturer to use just one supplement mix than to have various types for different products. They buy in greater volumes, and therefore get lower costs. (Darwin’s uses different premixes for poultry and ruminant foods).

Adding Whole Foods High In Copper and Low In Copper

If you’re making your own food and not feeding any ruminant livers; typical bone-in chicken recipes need about 2.5 mg Cu per 1000 kcal growth (about 1.5 pounds’ lean food) and, for adults, 1.0 mg per 1000 kcal to meet minimum AAFCO standards. Choose one of the foods on the top of the High Copper Foods table, the foods with the most copper per calorie.

If you have a copper sensitive breed, and want to add whole foods to your dog’s diet, choose one of the foods near the bottom of the list of Low Copper Foods. If you feed a meat-based diet and want to add inexpensive calories, consider the low copper foods such as tapioca, which has almost no Cu.

For most dogs most of the time, the high-protein, low-copper highlighted foods are best. Fish such as eel, cod, flounder and sole are high protein, low calorie, and low in copper.

Some vegetables are high in copper; however, I do not have good data on the bioavailability (the ability of the dog to use the copper. Dogs and cats are not able to use some sources of copper, for instance the copper in pork liver.) If you’re feeding a low copper diet and want to feed vegetables, it may be wise to stick to red, green leaf, and iceberg lettuce, but not romaine.

The copper content of selected foods from most to least, mg per 1000 kcals; the amount of that food needed for 1 mg of Cu; and the amount of calories added with that 1 mg of Cu. If you want to add nutritious whole foods that are low in copper, choose the foods near the bottom of the table. If you want to boost the Cu content of your dog or cat’s diet, choose the foods near the top of the table.